Douglas has always been interested in art but says that he hasn’t really drawn anything recently but does love photoshopping. Douglas says, “I suppose what I do is the equivalent of what ‘pimp my ride’ is to cars as to what I do to pictures/photos. I sometimes refer to what I do as ‘digi-punk’ art. Basically I either get an idea for a picture and create it by taking different parts and pieces of other pictures to create a new one.”

The other thing Douglas likes to do is turn a photograph into a ‘painting’ by using various effects and layers and many ‘paintings’ can have as many as 20 layers.

When I, (Clarabelle) went on holiday this year to Ibiza I took a photo of my footprints in the sand, Douglas then added his own creative art to the photo and used one of my original poems to add a touch of uniqueness too.  Douglas says, “the ‘footprints in the sand‘ picture with poem had about 8 layers and was itself the result of several ‘halfway’ pictures to get the final result.” 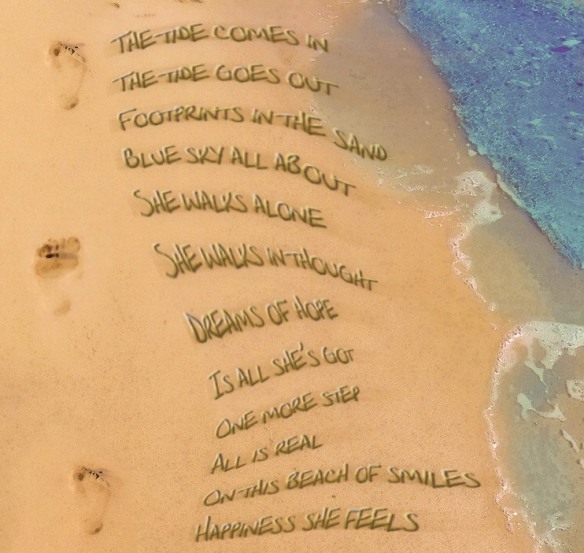 Douglas also takes his own photographs with the view to photoshopping them when he gets home – a good example of that is: Photo 1 and the original photograph:  Photo 2

My next step would be to actually turn my creations into real paintings by actually getting the brushes out and painting versions of them.  Below is Douglas’ own caracature creation of himself.  🙂

I am sure you will all agree, Douglas is a very talented creative individual and if you would like to see more of Douglas’ work, then please feel free to head over to his facebook page, Wiggly Beezers Arts you will also find there another creative picture of me, Clarabelle with the “City Lights” poem added to it.

I would like to give a special thank you to Douglas for sharing his creatives talents on this Clarabelle blog, it’s been an absolutely pleasure. 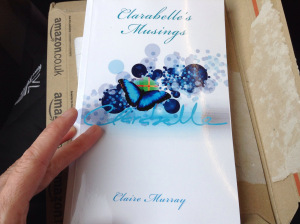 eBook “It’s All About Gratitude”

It's All About Gratitude